It’s a fact of modern life: Mac can run slowly for seemingly no reason, but chances are there is a reason the Mac is running so poorly and we’ll cover the most common reasons, how to know if each reason is causing the slow down, and most importantly, how to fix it. If your Mac is running slowly and it feels like a snail could launch a new app or load a web page faster than the computer could, read on.

Spotlight is the search engine built into OS X, and anytime it indexes drive data it can slow down a Mac. This is typically worse after reboots between major file system changes when the index is rebuilt, a major system update, or when another hard drive full of stuff is connected to the Mac. Typically Macs with SSD’s won’t feel the slowdown quite so much, but for Mac models still using spinning hard disk drives, it can feel very slow.

How to Know: It’s easy to check if Spotlight is what’s causing the slowdowns though, just click on the Spotlight menu in the upper right corner. If you pull down the menu to see an indexing status bar, you know it’s running.

You can also look in Activity Monitor for the “mds” or “mdworker” processes, both of which are related to Spotlight.

Solution: Wait for Spotlight to finish indexing, it usually doesn’t take too long.

Whether the Mac is newer and updates through the App Store, or older and goes through Software Update, either of these processes can cause a temporary slowdown to the system while they launch in the background, query for available updates, and

How to Know: After a minute or so you’ll get a Software Update notification

Solution: Keeping system software up to date is one of the best things you can do as part of a Mac maintenance routine. Let it run, install the updates, and reboot.

Anytime any computer is running very low on disk space, the computer will slow down dramatically, and Macs are no different. The reason is fairly simple; between the operating system and all your apps, a lot of temporary cache files are generated, and things are swapped in and out of memory and to the disk as needed. If your disk is full, those actions take longer because older cache files and swap files must be deleted before new ones can be generated, which creates a stall before any further system process can be taken. This whole thing can be painfully slow especially on traditional hard disk drives, and can leave any Mac feeling as slow as molasses.

How to Know: Checking available hard disk space is a cinch, just go to the desktop and open any folder, then pull down the “View” menu and select “Show Status Bar”. Now look at the bottom of the Finder window you opened, if the number of available space is less than several GB’s, you should take action. If the number is 0, you need to take immediate action! 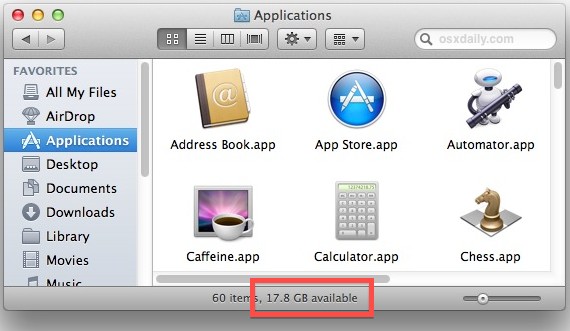 Solution: The best thing to do is clear out files you don’t need any more. First, go to your Downloads folder and remove stuff you don’t need because it can fill up awfully quick if you don’t clear it out yourself. Next, recover disk space by downloading a free app like OmniDiskSweeper to discover where all your storage went. Delete unnecessary files. When finished, reboot the Mac, because rebooting will cause temporary caches to clear out and that can often free up space as well.

How to Know: Open “Activity Monitor” from the /Applications/Utilities/ folder, click on the “System Memory” tab at the bottom, and look at the colorful pie chart. If you don’t see any green, you’re running low on “Free” memory, and you can check just how low by looking at the “Free” item. “Inactive” is another potentially valuable resource to look at.

Solution: Quit apps that are no longer in use, and try relaunching ones that you are using. Web browsers in particular, like Safari, Chrome, and Firefox, will often consume more RAM than they need to the longer they are left open, as past web pages are stored in memory. Also, some websites have memory leaks. Quitting and reloading a web browser can often free up a ton of RAM.

If an app or process is consuming a lot of your processor, other things going on with the Mac will slow down dramatically. Tons of different things can take up CPU, and though most are temporary as a process executes and completes, some errant processes go wild and continue to hog far more CPU than what is appropriate.

How to Know: Again, open “Activity Monitor” from the /Applications/Utilities/ folder, but click on the “CPU” tab at the bottom. Watch the “% Idle” for a few seconds, if that number is consistently below 60 or so, you have something that is eating up your processor.

Solution: Still in Activity Monitor, click the “CPU” item at the top to list items by processor usage. The topmost item(s) will be your culprit, if those apps or processes aren’t in use, quit them to free up CPU.

6: Too Many Apps Open at the Same Time

This is simplified way of saying you’re either out of RAM, have an app being a CPU hog, the disk is thrashing, or any number of other problems that can occur when you simply have way too many apps open and running at the same time.

How to Know: The easiest way to tell is if the OS X Dock is a plethora of every app installed on your Mac.

Solution: Quit apps you aren’t using, the more the merrier.

7: Not Enough RAM for Your Needs

Speaking of running out of RAM and having too many apps open, it’s possible that you simply don’t have enough RAM to use your Mac at optimal speeds for your usage patterns. Thankfully this is very easy to determine, find out how to tell if your Mac needs a RAM upgrade by reading this great guide.

8: Your Desktop is Full of Icon Clutter

Did you know that having a desktop full of a billion icons slows down a computer? This is because each icon gets drawn as a window, and OS X renders a preview of the icons and their contents, each of which takes up resources to redraw as things are moved around.

How to Know: Your desktop is a disaster of files, documents, folders, with more icons than wallpaper visible.

Solution: Tidy up your desktop, ideally down to just a few select important things. If this sounds daunting, even creating a new folder called “Desktop Stuff” and throwing EVERYTHING from the desktop into it will dramatically speed things up. Also, there’s some great apps out there that will tidy up your desktop for you, try those out if you’re bad at managing the desktop clutter, or consider hiding the desktop icons completely.

9: The Hard Drive is Failing

Failing hard drives do not perform well, but potentially worse than that is the chance that you could lose all your important data and files. This is perhaps the least likely reason a Mac runs slow, but it’s also the worst possibility.

How to Know: You hear unusual sounds, clicks, or chunking coming from your computer and hard drive. Running Disk Utility’s First Aid fails repeatedly or throws tons of errors that are unrepairable with the “Verify” and “Repair Disk” functions.

Solution: First, stop everything else and BACK UP YOUR DATA because you could lose it if you don’t. Run Time Machine, copy all your most important files to an external drive, whatever it takes. Next, buy a new hard drive, and consider an SSD because they’re faster and less prone to some of the trouble traditional spinning drives are. Finally, consider taking the Mac to an expert, like the Genius Bar at your local Apple Store.

SHOULD I COVER MY LAPTOP CAMERA?

This website uses cookies to improve your experience while you navigate through the website. Out of these, the cookies that are categorized as necessary are stored on your browser as they are essential for the working of basic functionalities of the website. We also use third-party cookies that help us analyze and understand how you use this website. These cookies will be stored in your browser only with your consent. You also have the option to opt-out of these cookies. But opting out of some of these cookies may affect your browsing experience.
Necessary Always Enabled

Performance cookies are used to understand and analyze the key performance indexes of the website which helps in delivering a better user experience for the visitors.

Analytical cookies are used to understand how visitors interact with the website. These cookies help provide information on metrics the number of visitors, bounce rate, traffic source, etc.

Advertisement cookies are used to provide visitors with relevant ads and marketing campaigns. These cookies track visitors across websites and collect information to provide customized ads.

Other uncategorized cookies are those that are being analyzed and have not been classified into a category as yet.