Why is My Computer Overheating?

A common issue that many computers suffer from is overheating. As mobile computers are getting slimmer, there is less room for cooling fans or even just air to circulate. With desktop computers, more powerful processors and huge video cards are generating more heat inside the cases. In this article we will explain just why your computer overheats, and outline ways to combat it! 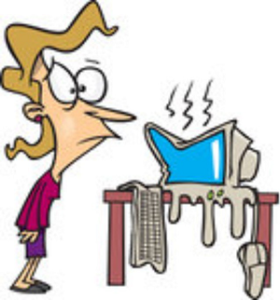 The industry led trend for laptops is smaller, thinner, and lighter. At the same time they are trying to eek more power out of them. Which, for the most part, is a good direction to go. Who doesn’t want the computer they have to schlep around everyday, to weigh as little as possible, but still be robust enough to handle the tasks they throw at it? Unfortunately, all this svelte-ness comes at a price. Not in dollars, although price does seem to rise in proportion to the slimness of the computer. That’s a subject for another post. I’m talking about the hardware. It makes sense, that in the quest for ever thinner devices, something would have to be sacrificed to achieve the desired dimensions. That sacrifice is cooling. Today’s ultra thin computers have either shrunk fans to the point that their usefulness is debatable, or eliminated them altogether in favor of passive cooling via awkwardly designed heatsinks. This combined with the distinct lack of airflow AND the heat generated by the latest generation of CPUs & GPUs, makes over-heating an all too common ailment for laptops as they get older.

Desktop computers are still very much in use today. While they always have been a staple in the business sector, they are experiencing renewed popularity in gaming and custom build enthusiasts. The main reason is the diversity of configuration and expansion. Gamers are chasing the fastest game frame rates with the biggest, baddest video cards and often overclocking (DIY increasing the speed of) their CPUs! These are options that will noticeably add to the heat generated inside of your computer. Business desktops tend to not get replaced as often as consumer computers, thus are more likely to experience conditions conducive to overheating such as the thermal paste drying out over time.

If your computer is more than 1 year old, and is experiencing high temps, the first step would be to have the thermoconductive material (thermal paste) re-applied. If you are not experienced with computer repair, I would recommend letting a professional handle this task to prevent damage to your components. Replacing the thermal paste and blowing any debris out of the fans and heatsink fins is called a “heatsink service.” It allows the heatsink that is in contact with your CPU to pull the heat generated by the chip away from it so it doesn’t damage itself or nearby circuits. This thermal paste will always dry out over time, but the amount of use and other cooling factors determine how quickly it will need to be refreshed.

For desktops, another hardware solution is to add more fans! More fans will increase the air circulation which will help lower the ambient temps in the tower. Again, probably best left to a professional as adding more fans could require re-configuring internal components. Liquid coolers are also often used by overclockers to get the best cooling possible, but we recommend that only experienced users who are comfortable monitoring their systems and replacing components themselves go with water cooling options since adding liquid inside a computer risks damaging other components even if it’s advertised as a “closed loop” liquid cooler.

Laptop solutions are more restricted due to the lack of space. Other than the heatsink service mentioned above, the main thing you can do to help keep laptops cooler is to make sure they have adequate airflow around them. That means using them on a hard flat surface, such as a desk or table. No blankets, beds, carpets, or even laps. Another tip is to keep the air vents clean from dust and debris by occasionally blowing them out using canned air. Some people also use laptop cooling pads with extra fans to combat overheating, but they shouldn’t be necessary if everything is working as it should (thermal paste is fresh, fans are working and clear of debris, and the system is used on a flat surface with good ventilation).

How A Firewall Can Protect Your IT Network And Business

A killer experience w my baby

The doses of these drugs may need to be adjusted when taking other drugs that alter certain liver enzymes, such as the CYP3A4 enzyme cialis buy online Your body will thank you

Second, therapy is a lengthy process, usually taking between six to 12 months.